The Impatient Writer’s Chicken Soup: Advice on the Writing Process and a Delicious Recipie

Soup and writing have a lot in common. One important connection to note is that they both improve when they are allowed to sit and simmer for ample time. If I eat a soup that hasn’t been sitting long enough, the vegetables will be hard and the flavors won’t have had time to fully permeate the broth. If I don’t let a story rest between drafts, my characters won’t mature, my meaning will be shallow and my language will be flawed.

When I first decided to try and publish my writing, I made the mistake of thinking a story was done too soon. I wasn’t sending first drafts out, but I wasn’t letting the stories rest long enough either. I’d finish a draft and jump right into the second and third. I’d think, Well, I can’t think of anything else to change, read it one more time and think I don’t see any grammatical errors. I’d send the draft out to a publication and a few weeks later, get a rejection.

Before submitting it elsewhere, I would revisit the story. The type-o’s and grammatical errors would leap off the page. I’d cringe at excess words and forced dialogue. I’d gape through plot holes and be left with little or no resolution at the end. I’d feel like my insides were twisting around with regrets and what if’s.

Did they stop reading after the third typo-o?

If I had better dialogue and a stronger plot, would this story have gotten accepted?

I observed the same thing hurting my students, though in their case, it was more procrastination than impatience. They wouldn’t leave themselves enough time to let the story rest, so their final drafts of essays would be riddled with grammatical errors and logical flaws that they caught on their own when given the chance to review the essay in class before turning it in.

I am a very impatient person. I like to know what is going to happen next, and when I know something I want is coming, I want it now. I hate waiting. So even after I realized I needed to let my stories rest, I would have a hard time making myself wait, just like I never wanted to wait for my soup to finish cooking.

When it came to soup, I realized that rice was the answer to my impatience. If I used pasta, the pasta would be soft enough to eat fifteen minutes after I added it. However, if I used rice, I had to wait at least an hour after I put the rice in if I didn’t want to be constantly crunching on uncooked rice. I cheated a couple times, but learned my lesson after getting a hard grain stuck between my teeth. Furthermore, I could plan the time I cooked the soup so I wasn’t hungry while I was cooking it. Or I could eat a snack while I was waiting for the broth to boil so I wouldn’t be starving as soon as it was edible. This way, by the time I ate it, the flavors would be fully permeated.

With writing, I use similar strategies. I can send it to a reader who I know will take longer to give me feedback. While I’m waiting, I can work on something else, eventually returning to the story with a fresh eye. I can finish it right before I collect a stack of essays from my students knowing I wont really be able to pay it full attention until I am done.

I can read a good novel as soon as I finish the story. Or better yet, a good series. The best option is starting a new story, getting so immersed in that one that I need to know what happens next so I write it for a few weeks until I finish and then go back to the original story and catch those bland descriptions and comma splices.

If your impatient like me, make sure you find your rice so you can let your story rest before you call it done and send it out. Now, enjoy my recipe for impatient writer chicken soup! 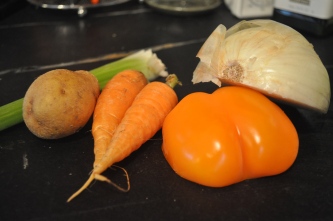 1 small Yellow onion (or part of a large one) 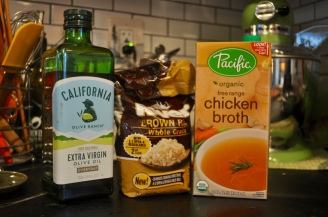 1 Box of chicken broth (or equivalent of homemade stock)

Step 1: Put your chicken in the microwave to defrost.

Step 2: Dice your onions and bell peppers while the chicken thaws.

Step 3: Add olive oil, onions and peppers to the pan.

Step 4: Cut up the chicken into small pieces and add them to the pot.

Step 5: Cut up your other vegetables while the chicken cooks. Add them as they are cut,
starting with the ones that take the longest too soften: carrots, celery, potato, and tomato. Add the teaspoon of thyme once all the veggies are in and stir, cooking until the veggies are tender. 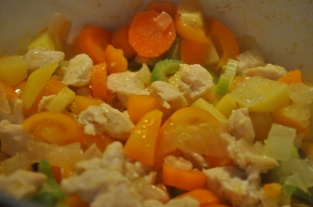 Step 6: Pour the broth in and bring it to a boil.

Step 7: Add the rice and reduce heat to low. Allow to simmer for at least one hour. However, the longer you let it cook, the better it is going to taste.

Sara Codair lives in a world of words, writing fiction in every free moment, teaching writing at a community college and binge-reading fantasy novels. When not lost in words, Sara can often be found hiking, swimming, or gardening. Their first novel, Power Surge, was published in October 2018. Find Sara's words at https://saracodair.com/ and @shatteredsmooth. View more posts